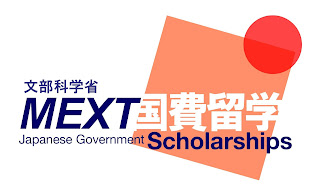 The Ministry of Education, Culture, Sports, Science and Technology (MEXT) of Japan offers scholarships to international students who wish to study in graduate courses at Japanese universities as Research Students (either regular students or non-regular students) under the Japanese Government (MEXT) Scholarship Program as follows.

Research student is those who are enrolled in a master’s course, a doctoral course, or a professional graduate course at a graduate school, or who are conducting research in a specialized field at an undergraduate department, graduate school, institute attached to a university, etc. without the aim of completing the course, or who are receiving preparatory education in the Japanese language and other subjects prior to placement at the university, etc. (Excluding Young Leaders’ Program Students or Teacher Training Students.)


Field of Study:
Applicants should apply for the field of study they majored in at university or its related field. Moreover, the fields of study must be subjects which applicants will be able to study and research in graduate courses at Japanese universities. The fields of study may be restricted to particular fields by the Japanese Embassy or Consulate (hereinafter referred to “Japanese diplomatic mission”) in the applicant’s country. Traditional entertainment arts such as Kabuki and classical Japanese dances, or subjects that require practical training in specific technologies or techniques at factories or companies are not included in the fields of study under this scholarship program. A student who studies medicine, dentistry or welfare science will not be allowed to engage in clinical training such as medical care and operative surgery until he/she obtains a relevant license from the Minister of Health, Labor and Welfare under applicable Japanese laws.

Requirement:
MEXT accepts applications from international students for study in Japan who satisfy the following qualifications and conditions. Its aim is to foster human resources who will become bridges of friendship between the grantee’s country and Japan through study in Japan and who will contribute to the development of both countries and the wider world.


How to Apply:
For Apply applicants/grantees should inquire the Japanese diplomatic mission in the country of the applicant’s nationality and follow their instructions.
For Indonesian please click HERE