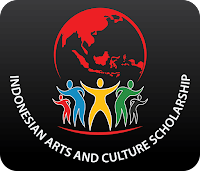 The Indonesian Arts and Culture Scholarship (IACS) has been conducted since 2003 and was initially offered to and participated by member countries of the South West Pacific Dialogue (SwPD); Australia, New Zealand, Papua New Guinea, the Philippines, Timor-Leste, and the host Indonesia.

Bearing in mind the significance and advantages obtained from the program, the scholarship was expanded over the years to include member countries of ASEAN, ASEAN+3, PIF countries, as well as many countries from all regions in the world. In the period of 2003 to 2018, the scholarship has been awarded to 920 alumni from 77 countries.

Due to the limited space and the vast amount of interest in the program, the Ministry of Foreign Affairs of the Republic of Indonesia in cooperation with Indonesian Embassies and Consulates overseas, hold a series of selection process. Taken into considerations are, among others, the awardees’ background, gender, regional representation and the interest to learn Indonesian culture.

In order to deepen the awardees’ understanding of Indonesian arts and culture, and to enhance their skills for the final performance, awardees will be divided and assigned by the organising committee to different arts centers for the duration of approximately 3 (three) months. The arts centers are located in 6 (six) provinces, namely: Bali; West Sumatera; East Kalimantan; East Java; South Sulawesi and Yogyakarta.

Awardees will live within or around the arts center, allowing for the chance to experience the local heritage and interact with the local community. Synergy between theory and practices shared inside and outside the arts center would undoubtedly become the driving force for shaping international cultures and norms, and will eventually strengthen regional as well as global understanding and cooperation at a people-to-people level.

Objective:
The program serves to demonstrate Indonesia’s commitment as an initiator of the establishment of South West Pacific Dialogue and as the originator member of ASEAN in advancing the social culture cooperation in the region. The program also has an objective to encourage better understanding amongst participants from member countries through Indonesia’s immensely diverse arts and cultural heritage. Finally, the programme aims to cultivate a culture of cooperation, emerging from direct contact and sharing of cultures amongst people involved in the program, leading to thriving diplomatic relations in the region and worldwide.


How to Apply:
For a more detail information please also click below: