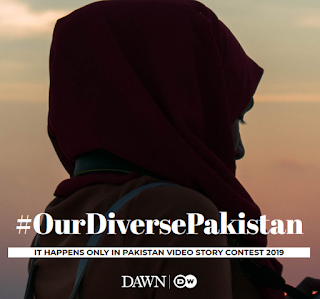 Entries are invited for the DAWN Video Story Contest 2019. Once again, Dawn.com and DW اردو invite you to pick up your camera and shoot stories from Pakistan, this time recording the diverse heroes and unsung champions among us, for a chance to win over Rs2million in prizes.

The video story Competition #OurDiversePakistan invites professional and amateur documentary filmmakers from all over the country to share unique tales of people and communities, and capture the journey of Pakistan’s diverse and undiscovered superstars.
⠀⠀⠀⠀⠀⠀⠀⠀⠀⠀⠀ ⠀⠀⠀⠀⠀
Entries will be accepted between July 5 – August 17, 2019. Please note that these short documentary films must be original, and cannot be fictional or re-enactments.

After the contest ends, three lucky teams from the top 10 will get a chance to work with DW Documentary to produce a 12-15min long documentary film and win a prize of Rs330,000 each.

SUBMIT VIDEO The candidates can participate in the contest between July 5 and August 17, 2019 by following these steps: